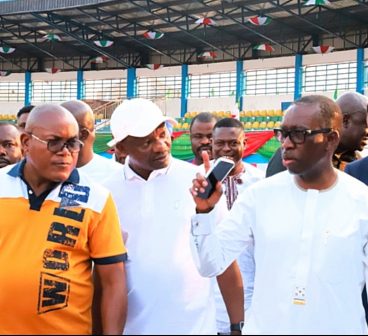 Vice-Presidential Candidate of Peoples Democratic Party (PDP) and Governor of Delta, Sen Dr Ifeanyi Okowa, said general acceptance of the party across the country was an indication that Nigerians were truly tired of the inept All Progressives Congress (APC)-led Federal Government.

Speaking to journalists on Sunday at the Stephen Keshi Stadium, Asaba, shortly after inspecting preparations at the facility, venue of the Presidential Rally in the state on Tuesday, Okowa said that PDP would provide Nigerians with all-inclusive and purposeful leadership that the country yearns for.

He said that the warm reception and support PDP had across the country showed that Nigerians had become optimistic about the need for positive change, adding that the party was determined to rescue the nation and deliver good governance to the people.

He said that the party’s Presidential Candidate, Atiku Abubakar, being an experienced politician knew the path to Nigeria’s recovery and would work with him and other citizens to recover, reset and rebuild the country.

According to him, Nigerians are already tired if the APC-led government and we are very much aware of what the situation is in this country.

“What we are seeing today is not the Nigeria that we dreamt about with the high level of insecurity and the disunity amongst the people and the fact that we cannot trust ourselves anymore because of the non-inlcusiveness in government, that obviously is not the Nigeria we thought about.

“The economy is in great shambles and we believe that it will take our administration because surely by the grace of God we will be there, its going to take us a lot of work, working also with Nigerians to get ourselves out of where we are at the moment.

“The economy is already definitely messed up but we believe that by God’s grace and with the programme that we have we can take Nigerians out of where we are to the new process of rebuilding our great nation,” he said.

The Vice-Presidential candidate said the party also believes that for the nation to function properly, the issue of restructuring and devolution of powers to states and local governments must be taken seriously.

“This is important because the more resources and the more powers and activities at the local and state levels, the more Nigerians can actually grow while competing with each other.

“There are lots of things that would be done and I believe that Nigerians have already seen that the APC-led government has not performed and we have been so welcomed across 20 states that we have visited.

“The reception has been very very good and we still have a lot of work to be done to let Nigerians know exactly what the situation is and the pathway to recovery.

“We believe that Atiku Abubakar is a very experienced man in government and the private sector and we believe that with his level of experience and capacity working along with myself and other Nigerians including the Organised Private Sector, the youths and the women folk, we can turn things around for the country.

“If we all work truthfully together in a government that will be purposeful and all-inclusive we believe that we would be able to rescue and recover Nigeria from where it is today,” he stated.

On preparations for the rally Okowa expressed satisfaction with the arrangements at the venue stressing that the party would have a very successful rally on Tuesday January 24.