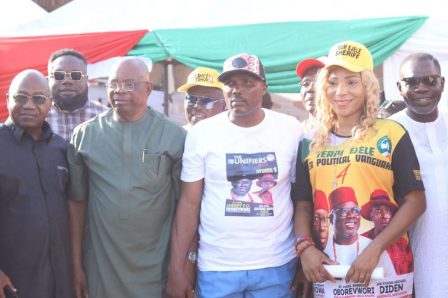 Opposition political parties in Ughelli North local government area have suffered depletions of their membership strength ahead of the February and March, 2023 elections.

This followed the defection of over 300 members of the All Progressives Congress, APC, and other opposition parties to the Peoples Democratic Party, PDP, during phases 1 and 2 empowerment programmes organized by an Executive Assistant to the Governor on Project Monitoring and Publicity Director of the Ughelli North PDP Campaign Council, Engr (Mrs) Christabel Obiuwevbi-Omonigho, at Oghara-Agbara-Otor.

Receiving the decampees, the Ughelli North LGA Chairman of PDP, Pastor Kess Numuoja, thanked them for making the right decision to join the winning team at this moment that Nigeria needed to be rescued from the menacing misrule of the APC.

Pastor Numuoje commended Engr (Mrs) Christabel Obiuwevbi-Omonigho for the empowerment programme, which served as a platform for the defection, saying that the party was eternal grateful to her and would encourage her to attain greater heights in politics.

Some party leaders present, including Hon Solomon Awhinahwi, the South South PDP Woman Leader, Mrs Tessy Ese Toru, among others, hailed Engr (Mrs) Obiuwevbi-Omonigho for putting smiles on the faces of the people and particularly for her interest in the growth and development of PDP in Ughelli North and the state at large.

In her remarks, Engr (Mrs) Obiuwevbi-Omonigho, who is also the Coordinator, Delta Political Vanguard in the Ughelli North, Ughelli South and Udu Federal Constituency, said the empowerment programme was to appreciate party faithful who had put in their best working for the party in order to encourage them to do more.

The Executive Assistant thanked the State Governor and Vice Presidential candidate of PDP, Senator (Dr.) Ifeanyi Okowa for inspiring members of the party to come out in their numbers for the campaigns across the state through the enviable track record of performance of his administration.

She commended the decampees for seeing reasons to dump their parties to join the PDP, assuring them that the party’s umbrella was large enough to accommodate both old and new members.

60 members of the party benefitted from the first phase of the empowerment programme, while 40 were considered in the second phase.

Engr (Mrs) Obiuwevbi-Omonigho urged the people of Ughelli North to vote massively for PDP in the fast approaching general election, insisting that only 5/5 performance was good enough for the party.

They, along with the decampees, received cash gifts, while over 600 pieces of wrapper were given out to the women.