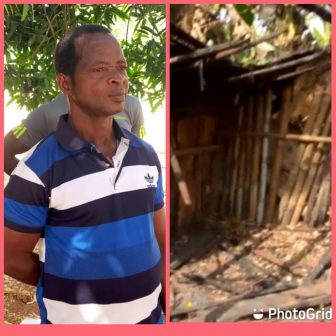 There is palpable tension in the peaceful Ibusa community, in Oshimili North local government area of Delta state, following recent criminal activities of persons suspected to be land speculators.
On January 13, 2023, in what seemed like a dramatic setting, thugs, numbering over 50, who operated on motorcycles, were said to have invaded a camp settlement at Akwugboko, on Obi Enueh family land, Umuolo, in Umueze quarters, Ibusa, leaving in their trail tales of woe.

The gang, led by one Sunday Okafor, which specialized in moving into people’s lands and estates to extort and impose levies, without recourse for any lawful authority or owners’ consent, allegedly abducted the Chairman of the camp settlement, one Chief Jerome Ikebude, about 3 am that fateful day.

The abductee, a septugenarian,  was said to have been taken to Sunday Okafor’s residence where he was tied up and given the beating of his life for refusing to get the settlers to pay levies to his group.

Following a distress call to the Ibusa Police Station, the Divisional Police Officer, SP Obioji Chidi, stormed the crime scene and met the abductee lying face down, with a strong resistance to get him released.

The police operatives were said to have expended some canisters of teargas to disperse the hoodlums before securing the release of the kidnap victim, and arresting their leader, Sunday Okafor in the process.

Narrating the incident to newsmen, the Diokpa of Obi Enueh family, Umuolo, Umueze, the rightful owners of the land, represented by Mr Lawrence Omame; said the criminal activities of the land speculators had become worrisome, as they were acting in a manner that could spell doom if not checked.

He said the settlers had lived in the camp for over 40 years without fear or hindrance and wondered why they should be subjected to constant harassment and oppression by criminally minded persons.

Also, Onowu Chekwube Ofuonyeadi, who had been working to protect the hundreds of acres of the family land in question, revealed that the said Sunday Okafor was released two days after his arrest due to the interest of certain influencial individuals in the matter.

He said he had petitioned the Assistant Inspector General of Police, AIG zone 5 and the Department of State Service, DSS, on the activities of the criminal gang but that no action was taken, adding that some members of the gang had been arrested in the past but that did not change anything.

Onowu Ofuonyeadi called for justice on the matter to forestall the loss of life, even as he disclosed that the hoodlums also set huts in the camp settlement ablaze and destroyed the dwellers’ farms, because the persons concerned should not be seen to be above the law.

When contacted, the Police Public Relations Officer, PPRO, Delta State Command, DSP Bright Edafe, confirmed the incident, but did not give details.

Attempts to get the suspect, Sunday Okafor, to comment on the matter were unsuccessful as he did not pick his calls.