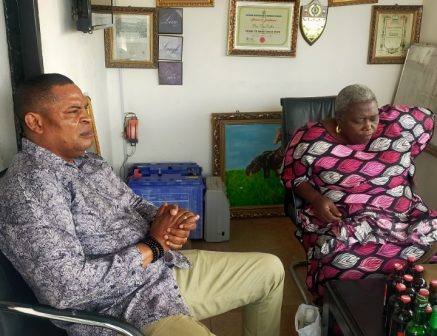 Women of Oshimili South have been urged to accord the fast approaching general election the seriousness it deserves by sinking their differences to collectively work for the success of all PDP candidates in the polls.

Executive Assistant to the Governor on Political Matters and former Oshimili South Constituency House of Assembly aspirant, Hon Taju Isichei, also known as Ikuku, made the call at a meeting with the Women Leaders of the eleven wards in the LGA.

Isichei noted that women were truly strategic stakeholders in the political space, affirming that there would be no politics and election without the women.

He stated that the meeting was called to discuss issues of common interest ahead of the elections, stressing that Oshimili South local government area needed to be in the mainstream of governance in the next political suspension, which could only happen if all the candidates were elected from the Presidency to the House of Assembly.

The former Special Adviser to Governor Emmanuel Uduaghan on Inter-Party Relations said he would remain a voice of the women because of their key role in the system, and appealed to them to forget whatever past experiences they had and work for the overall interest of Oshimili South.

The Governor’s aide promised to liaise with the party’s candidates on behalf of the women, with a view to ensuring that they were duly recognized and appreciated, insisting that politicians must not continue to do things the old ways because present day elections were solely dependent on the voters and not any leader.

He advised the women leaders to seek ways to make their jobs easier to ensure that a greater number of eligible voters in their wards were reached in the course of the campaigns, especially within the cells, to brighten the chances of PDP winning all the way.

In her remarks, the Oshimili South LGA PDP Woman Leader, Madam Mary Odiatu, thanked Hon Isichei for giving the women leaders the opportunity to discuss the problems facing them in heir respective wards, which they had not been able to do in larger settings.

Mrs Odiatu said the women were always ready to work for the party, assuring the meeting convener that the February and March elections would not be exceptions, as they were prepared to mobilize massive support for all the candidates.