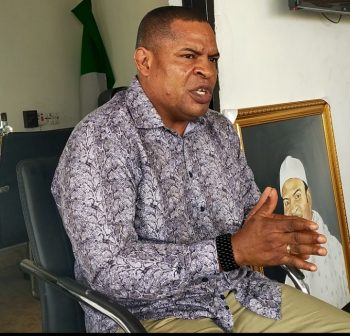 A chieftain of the Peoples Democratic Party, PDP, in Oshimili South local government area and Executive Assistant to the Governor on Political Matters, Hon Taju Isichei, also known as Ikuku, has called on youths of the area to work tirelessly for the victory of the party’s candidates in the February and March elections.

Isichei, who was addressing PDP youth leaders from the eleven wards in Oshimili South at his residence in Asaba, said it had become imperative that the youths, who were undoubtedly major stakeholders in every election, should think outside the box of how to ensure victory for the party given the peculiar nature of the forthcoming elections.

He noted that the 2023 elections would not be business as usual, adding that with INEC’s Bimodal Voter Accreditation System (BVAS) the party needed to work harder to popularize its candidates through aggressive campaigns to be able to have a comfortable edge over the opposition parties.

The former House of Assembly aspirant acknowledged the fact that the youths had their preferred aspirants before the party primaries, but stated that with the primaries over and the flag bearers known, they needed to sink their differences and support the candidates to win the elections.

Isichei, a one-time Special Adviser to Governor Emmanuel Uduaghan on Inter-Party Relations, reminded the youths that the party was working on delivering its candidates 5/5, emphasizing that losing any of the seats would not be in the best interest of the party.

He said working for the victory of the candidates would give them the power to negotiate inclusion in the party’s reward system, pointing out that the candidates would be made to have closer relationship with the youths and women before the elections to enhance their chances of winning the polls.

The Governor’s aide assured the youths that their efforts would not go unrewarded, promising to continue to galvanize support for the party and its candidates in  Oshimili South, his loss in the House of Assembly primaries not withstanding.

In their separate remarks, the PDP LGA youth leader, Felix Eboh, Michael Efianya of ward 7, Egbunike Ikechukwu of ward 9 and Adebisi Idris of ward 10, thanked Hon Isichei for calling the meeting to discuss issues bordering on the fast approaching general election, describing him as a grassroots politician of no mean repute.

The youth leaders highlighted the challenges in the way of the campaigns ahead of the elections, including lack of logistics, and pledged to mobilize greater support for the candidates if given the necessary wherewithal.