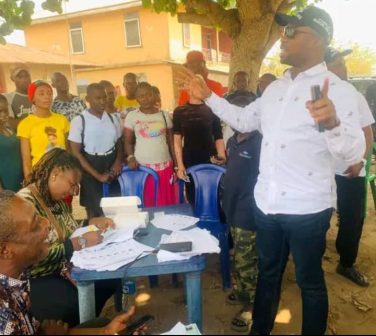 The enthusiasm of the people, their mobilization and support towards the collection of the Permanent Voters Cards (PVCs) are fueling the resolve of the Peoples Democratic Party (PDP) to rescue Nigerians from the pains inflicted on them by the APC-led federal government.

Chukwunwike said politics in Nigeria had grown beyond lip service to actually showing the people what one could do over a period of time.

He noted that people no longer followed campaign slogan of parties or persons, but we’re now swayed by leadership hinged on quality representation, character and respect for the masses.

The Council Chairman commended the people of Aniocha South for coming out in their large numbers at the various INEC designated locations to collect their PVCs and urged them to guard the cards jealously and use them to vote for PDP candidates in the elections.

One of the residents, a septuagenarian identified as chief Obiaka Josi reiterated the community’s support for PDP.

“We are not going anywhere else. PDP is our party”, Josi said.

He said the Council boss was the first to visit the town while still in power.

“You are the only Executive Chairman of Aniocha South Local Government that has visited Olodu. You have shown that you are not just a politician, but also a leader that understands the needs of his people”.