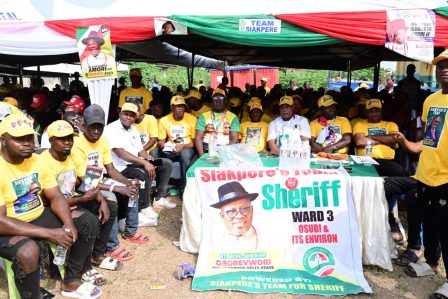 The Chairman of Team Siakpere For Sheriff, Hon Donald Akpojohare, has urged the people of Okpe local government area in particular and  Deltans in general to vote massively for the State PDP Governorship candidate, Rt Hon Sheriff Oborevwori and other candidates of the Peoples Democratic Party (PDP) in the fast approaching general election.

Akpojohare, who made the call at the Okpe and Ika North East campaign rallies of the party, also enjoined the people to go to their various units to collect their PVCs and to mobilize voters for Atiku-Okowa, Rt Hon Sheriff Oborevwori  and other PDP candidates for the February 25th, 2023 Presidential election and March 11 Governorship election.

According to him, members of the  Team Siakpere For Sheriff Oborevwori streamed out in their large numbers to canvass support for one of their own, the Speaker of the Delta State House of Assembly and State PDP Governorship Candidate, Rt Hon Sheriff Oborevwori.

He revealed that the Team would soon embark on door to door campaigns to ensure victory at the polls, adding that they were committed to delivering Oborevwori in the March 11, 2023 polls.

Akpojohare also stated that members of Team Siakpere for Sheriff Oborevwori would not relent in mobilizing support for the election of Rt. Hon Sheriff Oborevwori as the next Governor of Delta state, and for all other candidates of the party in the general election.

Team Siakpere for Sheriff Chairman implored the people of Okpe Kingdom in particular not to miss the golden opportunity of producing the next Governor of Delta state.

Also speaking, the Public Relations Officer (PRO) of the group, Hon S. P. Obire, described the PDP leading Governorship hopeful in the state as a down to earth politician, empowerment guru and a man with excessive local content.

He promised that the Team would work very hard for the victory of the Delta State PDP Governorship Candidate, Rt Hon Sheriff Oborevwori, Atiku/Okowa and other candidates of the PDP.

The Assistant Secretary of the support group, Hon Nelson Ihwighwu, said a lot of strategies and methodologies had been deployed to reach out to the electorate to enhance the winning chances of the State PDP Governorship Candidate, Rt Hon  Oborevwori and other candidates of the party in the forthcoming general election.

For his part, a leader of the group, Prof David T. Ejenobo, expressed confidence that the Speaker of the Delta State House of Assembly and National Deputy Chairman of the Conference of Speakers of State Legislatures of Nigeria, Rt Hon Sheriff Oborevwori, would be elected the next Governor of the  state and appealed to Deltans to vote for him and other PDP candidates.

Another member of the Team, Hon Oueghwe Jackson, said Rt Hon Oborevwori would not disappoint Deltans and would perform like the State Governor, Senator (Dr.) Ifeanyi Okowa in all ramifications and therefore urged the electorate to vote for him and PDP all the way.

At the campaign grounds in Okpe and Ika North East, members of the Team Siakpere for Sheriff Oborevwori 2023 had impressive outings as they were very visible.

Team Siakpere group, with UK based Mr John Ewhubare Siakpere as the Founder and Director General, is a staunch believer in the Oborevwori’s vision of putting Delta state ahead of other states in the area of socioeconomic development.

Members of the Team  Siakpere for Sheriff Oborevwori had remained focused on their support for the Gubernatorial ambition of the Delta State PDP Governorship candidate, Rt Hon Sheriff Oborevwori, just as they have been consistent, committed and dedicated to their contributions to the election of their Principal as the next Governor of Delta State.