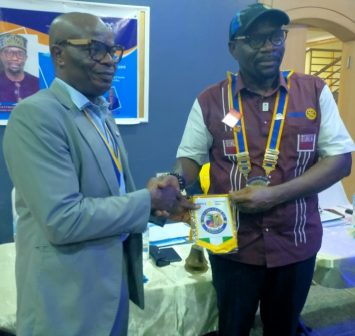 Ahead of the forthcoming general elections in the country, Nigerians have been urged to insist on choosing leaders that will ensure peace and security in the land.

The District Governor, Rotary International, District 9141, Mightyman Aye Dikuro, who made the call in Ogwashi-Uku, Aniocha South local government area of Delta state, in an interview after addressing Rotarians during his routine visit to Rotary Clubs under his District, said what Nigerians desired most was to live in harmony in a secured environment and every other thing would follow.

Dikuro emphasized that Rotary International as an organisation was apolitical, but would encourage its members in Nigeria to vote their consciences in the coming elections in line with the focus of the organization.

The DG, who had earlier visited some projects being executed by Rotary Clubs in Asaba and Ogwashi-Uku, including the Administrative Building and Toilet Facility at Ikelike Model Primary School, Ogwashi-Uku, expressed delight in the burning desire of the members to give service to the society, while commending the Ogwashi-Uku Gateway Club for the ongoing projects, and urged them to sustain the tempo.

He called on individuals with the passion of giving to partner with Rotary International so that their contributions could be better appreciated in the society and stressed the need for increased community participation in securing facilities provided by the Clubs and putting them to judicious use.

Dikuro also called on professionals from all walks of life to join the Rotary Clubs in order to unite in rendering service to change lives, pointing out that the Clubs needed to increase their membership to be able to benefit from the enormous funds at the disposal of the Rotary International through the Rotary Foundation.

Rotarians from the Ogwashi-Uku Gateway, Asaba Citadel, Asaba East, Kwale New Dawn and Medical City Clubs were at the interactive session with the District Governor in Ogwashi-Uku.

In his remarks, the President of the Ogwashi-Uku Gateway Rotary Club, Rotarian Kenneth Madock Okwuenu, thanked DG Dikuro for the visit, which he said was inspiring to the members and assured him that the Clubs would remain committed to driving the programmes and projects of the Rotary International to ensure the realization of set goals.