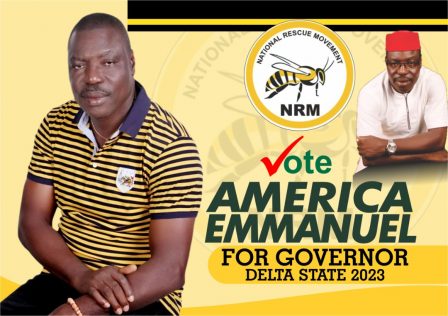 Mr America, who was accompanied by party leaders, told the people of Oleri that NRM was sure of coming to power in Delta come May 29, 2023, to fix the problems of the state.

He noted that Nigerians, Deltans inclusive, were facing untold hardship due to the high level of inflation and insecurity in the country and assured the people that he had all it takes to make life more meaningful to them.

The NRM Governorship hopeful said as part of measures to cushion the effect of the harsh economy, he would review downward the current fees being paid by students of the state-owned Universities and Polytechnics, adding that the institutions would be well funded to make them true citadels to learning.

Mr America appealed to the people of the state not to be carried away by sentiments, insisting that they must get it right in the forthcoming election by voting for him, promising not to fail.

He stated that it was high time Deltans voted for credible candidates and deemphasized political platforms, as experience had shown that hinging the choice of candidates on political parties had not helped the state.

The Governorship candidate urged Deltans to shun all forms of violence and electoral malpractice that could truncate the elections, even as he tasked INEC on free, fair and credible elections.