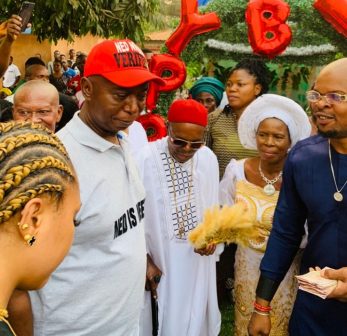 It was a day of solidarity and outpouring of love for Hon Prince Ned Nwoko as a mammoth crowd of supporters in his Idumuje -Ugboko ancestral home joined him to celebrate a kinsman, Chief Moses Chisimdi, on his 80th birth anniversary.

Accompanied by his Nollywood celebrity wife, Regina Daniels Nwoko, teeming admirers comprising men, women and youths of Idumuje-Ugboko, marched with Prince Ned Nwoko to the country home of Chief Chisimdi for the celebration.

Ned, who is the Delta North Senatorial andidate of the Peoples Democratic Party, PDP, in the February 2023 general elections, was in an upbeat mood, making merry in midst of his rural folks.

In a chat with journalists, Prince Nwoko said he was happy coming with his supporters at home to celebrate Chief Chisimdi as he turned 80.

The former member, House of Representatives between 1999- 2003, noted with excitement that longevity marked God’s unquantifiable gift.

“ I am at home, comfortable with my roots. You can see the large crowd who followed me here to celebrate our Chief. I am particularly glad because the celebrant, Chisimdi  is not just a highly respected Chief of Idumuje -Ugboko kingdom, but also one of my most ardent supporters. He is an elder I cherish so much.

“ His prayers and wise counsel have aided our development efforts here in the village, whether as regards the Sports University, my political journey so far and general well being of our people.

“ He is a fulfilled man at 80. He is still fit and strong. Only few people enjoy such fortune in this difficult times. God has preserved him for a purpose to serve our community and impact the younger generation with morals and values.

“ Chief Chisimdi is an honourable man. He has contributed to the peace and development of our community. He deserves all celebration. As we rejoice with him , I wish him good health, continued long life and more grace in the years ahead”, Ned said.

In appreciation for the visit, Chief Chisimdi, flanked by his wife, said it was a great honour to welcome Prince Ned Nwoko and entourage to his 80th birthday, describing him as a pride to Idumuje-Ugboko, Anioma and Nigeria in general