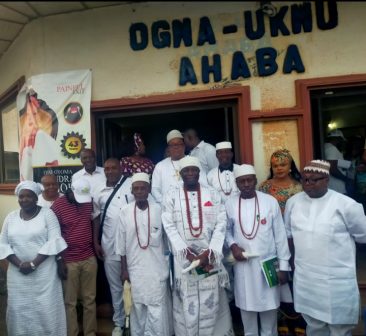 In an bid to give bearing and direction to political activities in Asaba, the Asaba Development Union (ADU) Worldwide, on Tuesday engaged political candidates of Asaba origin for this year’s general election in a dialogue.

The event, which held at the Ogwa-Uku Ahaba, provided opportunity for the candidates nominated for the election by different political parties to speak on their plans for the people if elected and entertain questions.

The candidates included one for Deputy Governorship position, two for House of Representatives and three for State House of Assembly elections.

In his opening remarks, the President General of Asaba Development Union (ADU) Worldwide, Prof Epiphany Azinge, clarified that the forum was not to endorse any candidate, but to give them equal opportunity to make themselves known to the people and present their manifestos.

Prof Azinge said ADU was not comfortable with the gap between past elected political office holders in the community and the people they represented, noting that the situation had resulted in the leaders doing things their own ways without being held accountable for their actions.

He explained that the engagement was to guide the electorate in making the right choices, adding that with the impartiality and neutrality which characterised the dialogue, whoever emerged victorious in the elections was sure of the support of the losers, in the spirit of sportsmanship.

The ADU helmsman said the Town Hall meeting would continue even after the elections, as those to be elected would be required to periodically come to brief the people on their stewardship, so that their activities could be closely monitored and micromanaged for the greater good of the community.

Speaking to the gathering, the State Deputy Governorship candidate of the All Progressive Grand Alliance (APGA) Ogbueshi Chiedu Alana, said he was the first running mate of Asaba origin to any Governorship candidate in the state, and appealed to the people to vote for his Principal, Chief Great Ogboru  and expect a turn around of the fortunes of the state and Asaba in particular, with him as Deputy Governor.

Labour Party’s Aniocha/Oshimili Federal Constituency House of Representatives candidate, Ogbueshi Ngozi Okolie, said he left PDP to pick the ticket not because of personal gains, but to serve the people, adding that he was compelled to vie for the position because no Oshimili person had been elected to the House of Reps since 1999.

Another House of Representatives candidate, Isioma Nda, of the All Progressive Grand Alliance (APGA) said she was not satisfied with the growth and development of the Aniocha/Oshimili Federal Constituency over the past 24 years and would change the narrative if given the mandate.

For his part, APC candidate for the Oshimili South Constituency House of Assembly election, Ogbueshi Soalueze Eluaka, alleged that the state capital, Asaba, was grossly  underdeveloped and promised to take legislative actions that would give the city, and indeed Oshimili South, the desired facelift if elected to represent the Constituency in the State Assembly.

Barr Bridget Anyafulu, who is the Oshimili South PDP House of Assembly candidate, regretted that opposition parties’ candidates were blind to all the PDP government under the watch of Senator (Dr.) Ifeanyi Okowa, had done to develop the State Capital Territory and called for constructive criticism of the ruling party, while promising inclusive representation of the Constituency if voted for.

APGA House of Assembly candidate for Oshimili South, Engr. Eugene Umunna, thanked ADU for the Town Hall meeting and urged the people to vote for him because he would make a difference in the representation of the Constituency in the State Assembly.