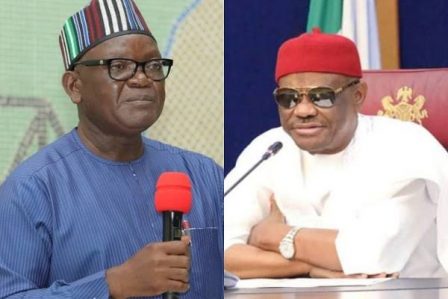 The Delta North People’s Democratic Party (PDP) senatorial candidate, Prince Ned Nwoko, has blamed Rivers State Governor, Nyesom Wike, and his Benue counterpart, Samuel Ortom, for frustrating the zoning of the party’s Presidential slot to the South-East, which led to the impasse currently rocking the party.

Recall that Governor Wike has fallen out with the party’s leadership since losing the primary election to Atiku Abubakar, a development which birthed the ‘G-5 Governors’, of which Ortom and Wike are leading members.

The disgruntled Governors, namely Nyesom Wike, Samuel Ortom, Seyi Makinde, Okezie Ikpeazu and Ifeanyi Ugwuanyi, are insisting that Ayu should resign his position as National Chairman to pave way for the swapping of the party’s leadership positions between the North and South.

Many had blamed the party for nominating Atiku Abubakar for the 2023 Presidential election, insinuating that the ticket should have gone to the South.

However, in a statement made available to journalists, Ned Nwoko, stated that Atiku would have respected the outcome of the zoning Committee set up by the party to resolve the issue of zoning, if Ortom and Wike had not compromised the Committee.

Nwoko stated, “For a very long time, most PDP leaders were determined to zone the Presidential ticket to not just the South but the South-East. A Committee was set up to achieve this. The Committee was headed by the Governor of Benue state, Samuel Ortom. At this point, Atiku said he will respect the outcome of the zoning and won’t contest if it is zoned to the South-East. But, Wike and Ortom thought otherwise.

“The Committee was compromised and it threw the zoning open to enable Wike contest. Wike and Ortom created the problem for South-East. Otherwise, we would have had a Presidential candidate from the South-East”.